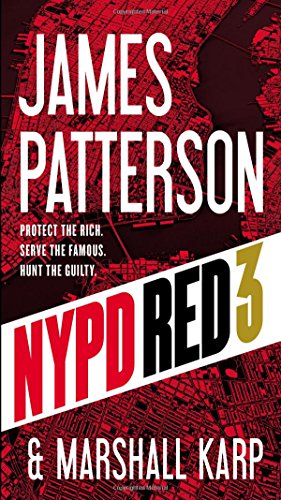 In James Patterson's sensational mystery, NYPD Red discovers a chilling conspiracy that terrifies the city's most powerful.NYPD Red is the elite, highly trained task force assigned to protect the rich, the famous, and the connected. And Detective Zach Jordan and his partner Kylie MacDonald-the woman who broke his heart at the police academy-are the best of the best, brilliant and tireless investigators who will stop at nothing to deliver justice.Zach and Kylie's New Year's celebrations are cut short when they're called to the home of billionaire businessman Hunter Alden, Jr. after he makes a grisly discovery in his townhouse garage. When Alden's teenage son goes missing soon afterwards, and his father seems oddly reluctant to find him, Zach and Kylie find themselves in the middle of a chilling conspiracy that threatens everyone in its wake-especially their city's most powerful citizens.NYPD Red 3 is the next sensational novel in James Patterson's explosive new series, a thriller that goes behind the closed doors of New York high society and into the depths of depravity.

With relentless danger around every corner, Detective Alex Cross is hunting down a kidnapper . . . but only if someone powerful doesn't kill him first.The President's son and daughter are abducted, and Detective Alex Cross is one of the first on the scene. But someone very high-up is using the FBI, Secret Service, and CIA to keep him off the case and in the dark.A deadly contagion in the water supply cripples half of the capital, and Alex discovers that someone may be about to unleash the most devastating attack the United States has ever experienced. As his window for solving both crimes narrows, Alex makes a desperate decision that goes against everything he believes-one that may alter the fate of the entire country. Kill Alex Cross is fast, exciting, and tightly wound, full of "fast-and-furious action" (Washington Post).

When a man falls to his death, it looks like a suicide-but Detective Michael Bennett finds evidence suggesting otherwise.A man plunges to his death from the roof of a Manhattan hotel. It looks like a suicide, except the victim has someone else's fingerprints and $10,000 in cash. Enter Detective Michael Bennett.BookShotsLightning-fast stories by James Patterson Novels you can devour in a few hours Impossible to stop reading All original content from James Patterson

After a lavish night of guilty pleasures in Monte Carlo, four best friends face an awful morning of arrests-and a fight for survival.Only minutes after Abbie Elliot and her three best friends step off of a private helicopter, they enter the most luxurious, sumptuous, sensually pampering hotel they have ever been to. Their lavish presidential suite overlooks Monte Carlo, and they surrender: to the sun and pool, to the sashimi and sake, to the Bruno Paillard champagne. As the weekend moves into pulsating discos, high-stakes casinos, and beyond, Abbie is transported to the greatest pleasure and release she has ever known.In the morning's harsh light, Abbie awakens on a yacht, surrounded by police. Something awful has happened: something impossible, unthinkable. Abbie, Winnie, Serena, and Bryah are arrested and accused of the foulest crime imaginable. And now the vacation of a lifetime becomes the fight of a lifetime-a fight for survival. Guilty Wives is the ultimate indulgence, the kind of nonstop joy-ride of excess, friendship, betrayal, and danger that only James Patterson can create.